What a wonderful feast of entertainment we had at the beginning of December. We travelled to a fabulous hotel on the sea front in Yarmouth. The weather was great for the time of year. The Christmas Extravaganza Show at Thurlsford was a magical show with choirs, dancers and orchestra in great costumes. There must have been nearly one hundred different entertainers in the show. On the way back we stopped at Springfield Shopping Centre where we managed to pick up last minute Christmas presents. The three days were wonderful. Highly recommended. 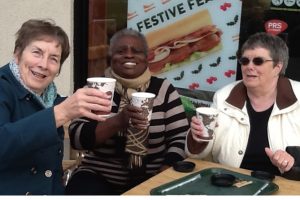 A small group of members visited the Junction at Sutton in Ashfield for a meal and an evening of entertainment from a Michael Buble tribute act. It was a very good, enjoyable evening. 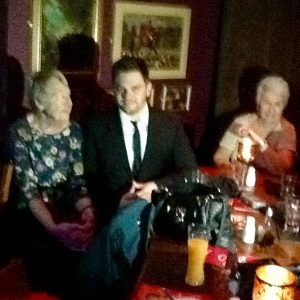 12 of our members enjoyed a night at the races. We went dog racing at Colwick. We were all impressed with the meal. Most had winners some more than others. It was very relaxed with waitresses fetching your bets so you could sit and enjoy the meal and racing. The track was visible through the window, but there were screens everywhere so no matter where you sat you could enjoy watching your dog win…or not. We would all like to go again and am sure others would also enjoy a visit. 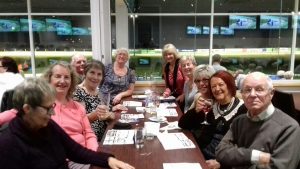 In October we had a lovely outing to Castle Howard in East Yorkshire. The Howard family has lived there ever since it was built over 300 years ago. Successive generations have welcomed visitors to the house. They say it is only with the support of the visitors that make it possible to continue the endless task of restoration and conservation. There is so much to see; the house, gardens, beautiful lake, Garden centre, and children’s play park. It is an interesting and beautiful place. We were shown various areas that had been used for filming scenes in TV productions and films. Beautiful views of the surrounding estate can be seen from the house. There was a little land train to take people with limited mobility around parts of the estate. It would be great to go again in the summer and take a picnic.

Visit to the Holocaust Centre, Laxton.

In 1933 prior to the war the U.K. government agreed to take 10,000 unaccompanied children from Germany and Austria on what is now known as the Kinder Transport. Following a very informative visit to the Holocaust exhibition, 29 members of our U3A had the privilege of spending time listening and talking to Howard Kendall, himself an Austrian Jew who left on one of the trains. One million other children never survived.

The white rose bushes planted in the memorial gardens represent people who perished in the holocaust. The plaque at one rose bush indicated the loss of 81 members of one family. The white rose symbolizes the struggle started in 1942 by Hans and his sister Sophia with their friend Christoph Probst against the atrocities being carried out by the Gestapo under the instructions of Adolph Hitler. 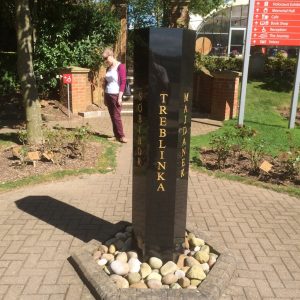 On a wet Thursday morning 38 members of the Eastwood U3A set off on a coach trip to Bridlington. Members of the Birdwatching group had joined us and they continued on to Bempton Cliffs for a few hours with the sea birds.  On arrival the clouds parted and we were set fair with blue sky.  It was a time to go back to childhood days at the seaside, enjoying a paddle, fish and chips, buying rock and the obligatory ice cream or waffle. The birdwatchers rejoined the rest of us with wonderful shots of the sea birds, a good day had been had by all, another very successful visit, thanks to our Social Committee. 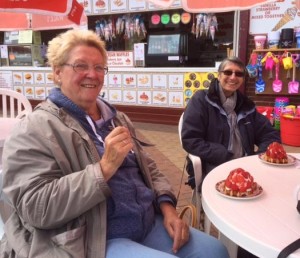 Oh what a ‘blooming’ trip!

On Wednesday 11th May, I joined other members of the U3A on a trip to Lea Gardens. The display of rhododendrons was spectacular. The rail had just stopped and drops were still clinging to the exotic blooms. I felt that I had just entered some beautiful garden of paradise with flowers of the deepest red, sunburst yellow, the purest white, angel pink and alluring violet. Some were even scented. We spent time in their garden shop where some purchases were made and had a drink in the café before moving on to Matlock.

Some members went to Matlock to view its antiques shops and view the open market. Another group stayed in Matlock Bath and enjoyed the river and its shops. I joined a small group and went up to The Heights of Abraham on the cable cars. The views from the summit were breath taking. For the fitter amongst us, a trip into The Great Masson Caverns was a must. It was an underground experience into the great chamber and through the hillside. For those of us that couldn’t venture through the caverns, a living reality film show was showing, so we did not feel that we had entirely missed out. We viewed the Victoria Prospect Tower and enjoyed time in the Tree Tops Visitor Centre before we had to make our way down again to the bus.
Thank you to Joan and Jill for organising this trip. I have no doubt that we all can’t wait for the next one.       Vivienne Allen

On a lovely sunny day, we visited Port Sunlight Village. After a coffee break we browsed around the shop. We entered the museum to see the exhibits detailing the history of soap making. Lord Lever founded the village, building homes, a school, a church and also providing healthcare for his workers. We watched a short film explaining what life was like for some of the people who worked and lived in the village. There was the opportunity to visit the Lady Lever Art Gallery dedicated to Lord Lever’s wife Elizabeth. We toured the village on the bus with our ‘Sunlight’ guide who pointed out the different styles of architecture and places of interest en route including the magnificent war memorial in the centre of the village. We had time to wander around and some who visited the church were lucky enough to hear the organ being played. There was time to squeeze in tea and cake at the garden centre before boarding the bus. It was a thoroughly enjoyable and interesting day and thanks go to Joan and Jill for all their hard work arranging the trip. 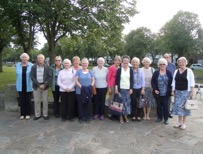 Grimsby Fishing Heritage Museum. Our trip to Grimsby and Cleethorpes on Thursday June 25th, 2015 was a resounding success. 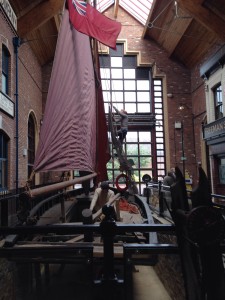 Our trip to Grimsby on Thursday June 25th was a resounding success. We learnt a lot about the fishing fleet that was based there and how the Icelandic cod war put it out of business by extending the fishing limit to 200 miles. Some of our group went on board a trawler and saw how the fishermen lived and worked for two weeks at a time, with two days off on shore while the fish was being unloaded if they were lucky enough to have a good catch. The museum itself replicated life on board a trawler, with lifelike displays and models. It was extremely well done.

From Grimsby we went on to Cleethorpes for the afternoon and enjoyed walking along the seafront. There was a little road train that connected with a small stem train, complete with whistles and soot smuts; and of course, no visit to Cleethorpes would be complete without the obligatory fish and chips. A fabulous day out and blessed with lovely summer weather. 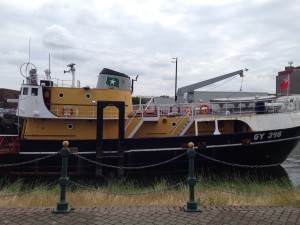 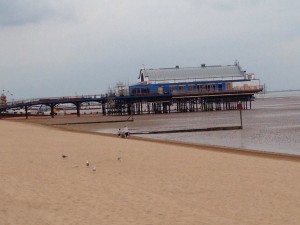 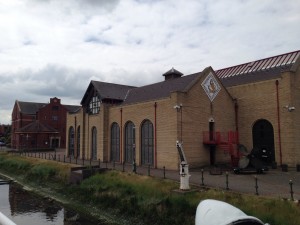 The centrepiece of the Memorial is two large bronze sculptures, representing loss and sacrifice, on either side of a central bronze laurel wreath. Created by Ian Rank-Broadley, the sculptures bear silent witness to the cost of armed conflict. 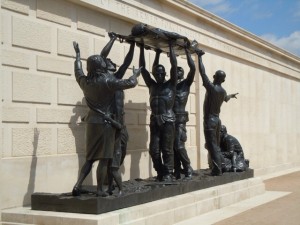 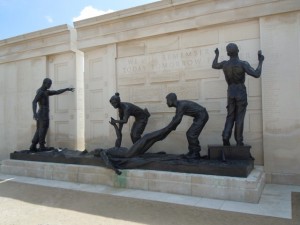 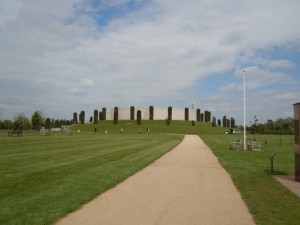 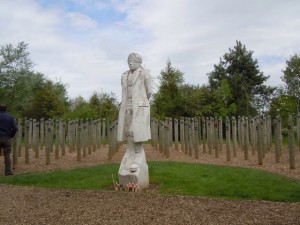 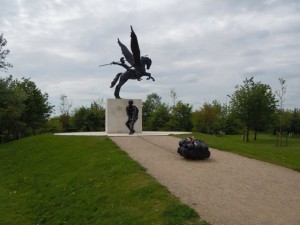 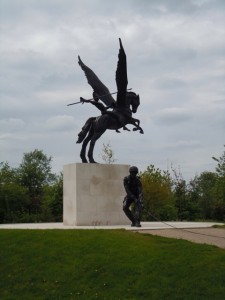 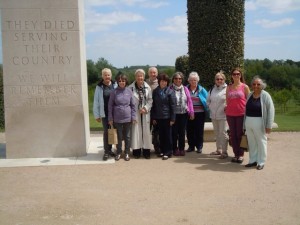 Royal Crown Derby.    On 24th March, 2015 28 members enjoyed a guided tour of Royal Crown Derby.   It was fascinating to learn all the technicalities of the manufacture and to see the workers in action.   The café was also appreciated with pretty china and tea strainers; a step back in time to a more gracious age before tea bags and mugs. 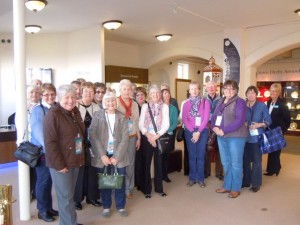 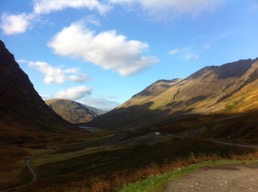 No tour of Scotland is complete without grand scenery and plenty of whisky and we were not disappointed. Six of us were welcomed to the Ben Doran hotel in Tyndrum. From where we enjoyed four days touring the Lochs and Islands, the famous Grouse Experience, Loch Lomond, Oban and the Sound of Mull, together with stunning scenery of Glen Coe. The visit culminated with a Highland Concert at Fort William where a haggis was ceremonially dispatched. 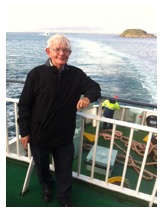 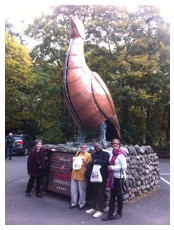 Beauvale Priory.  In October 2014, 28 members had a Talk and Tour of Beauvale Priory,  followed by afternoon tea at the Gatehouse Tea Rooms.