The Social Activities sub-Committee organise visits and outings which are open to all members of Eastwood & District U3A.

Our Adventure on the “Robin Hood Express”
On May 17th32 members of our U3A boarded a bright red vintage double decker London bus and headed to Sherwood Forest.
Our Guide Andy was extremely knowledgeable and gave us facts about the area and the ancient forest its heroes, villains, kings and of course the legendary Robin Hood.  The first stop was Rufford Abbey where we enjoyed coffee and cake before a tour of the remains of the Cistercian Abbey.  Then it was back to the bus and on to Sherwood Forest to see the Major Oak and enjoy a walk in the woods.  After lunch we made our way to Kings Clipstone to see the remains of King John’s Palace before our final stop of the tour, Newstead Abbey once the dwelling of the Augustinian Priors of Sherwood Forest and a well earned ice cream.  It was a really fascinating fact filled day enjoyed by us all. Lorna Stirland.

We had a very interesting trip to Doddington Hall near Lincoln the home of the same family since the Hall was built in 1600, although the family name has changed five times due to it being passed down through the female line.   We were taken on a conducted tour of the main rooms and were most interested to see the work being done to preserve the tapestries from the Yellow Bedroom originally hung in the 1760s.   This work was taking place in the Drawing Room by three young lady Conservators who had already worked on tapestries from the Holly Bedroom now rehung and certainly looking  “fresher”.    We also saw jars containing some of the nails and soot that had been extracted from the tapestries during the cleaning process.
Some of us were able to have a quick look round the gardens before the cold weather drove us into the cafes and wonderful Farm Shop, which would be well worth visiting at any time, along with the Bike Shop, Clothing and Home shop etc.
Thanks again to Joan and Jill for organising another successful trip.                     Barbara Wigley 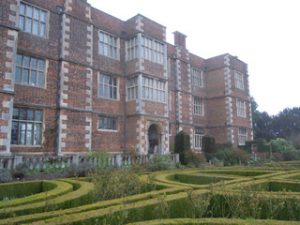 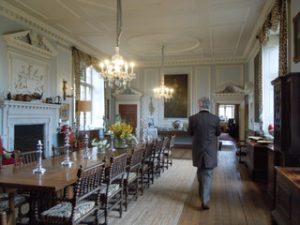 The Junction, Sutton in Ashfield – February 2018

On Monday 19th February a group of us went to the Junction, bar/restaurant in Sutton in Ashfield. The food was good and the show a laugh a minute. We saw a tribute to Peter Kay by Lee Lord. In our opinion he was funnier then Peter Kay himself. We all said it did us all good to laugh so much, it was a brilliant night.       Joan 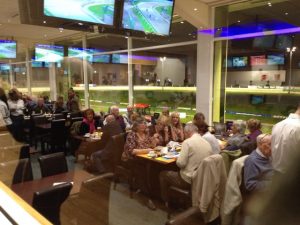 Members enjoyed a visit to Adams Cotswold Farm Park. It was a wonderful trip, brilliant weather and the animals were very friendly especially the goats. We also met the new piglets that were born in the morning and were lovely. It was a great day enjoyed by all, thanks go to Joan and Jill for organising it. Well worth a visit.   Sandra Jones

Visit to London and Wicked

Members enjoyed a fabulous weekend in London. They went to see the show Wicked which was described as great, stage effects and costumes always seem better in London.  Sunday morning was spent in Covent Garden where there is always plenty to see and listen to. Some of the group had the opportunity to talk with and have photographs taken with some of the Pearly Kings and Queens. They are a charity group founded by Henry Croft back in 1875 and they still keep the tradition going strong today. Henry spent his early life in an orphanage and went to work in the local markets where he got to know the Costermongers. This led to him starting to raise funds for charity with their help. Today there are 28 Pearly families     Joan Morley

On Thursday 16th February 2017 a group of U3A Eastwood members joined together at Morrisons Eastwood and took a coach trip to Cadbury World in Birmingham.  We arrived at the venue after a 90 minute journey and were taken into the main factory building where we were confronted by a massive sweet shop which showed every product they make in wonderful displays.  They even had a miniature railway engine running round at ceiling level, plus a nice cafeteria to one side.

We continued into the main exhibition centre, through different aspects of the world, to a setting of the shops in London where they began the chocolate company.  Next we saw a film describing the methods of making and producing chocolate.  We then went on through more passageways to see how the moulding is done etc.  We also sampled the chocolate and mixings.  On to a window view of a factory sweet room; we continued down more passages to a tunnel ride in an electric car, passing marvellous displays of the cocoa bean and ending in a snow and ice arctic scene.

Some of us then went round the village and gardens.  The main school tower, with its collection of bells, was interesting, as was the museum house.  Opposite was an old property that had been moved a mile to its present position with a treasure trove of interesting antiques etc on three floors.

I think it turned out to be a most enjoyable and interesting outing and I would recommend it to other members.  Well worth the visit.  Report & photos by Len Marsh 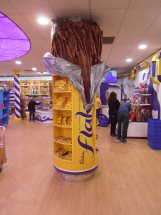 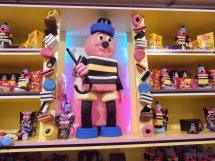 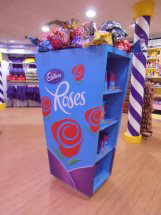 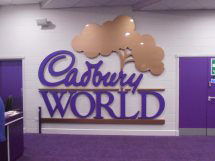