The City Treasures’ Group (17 members) met under the Council House Arcade and caught a bus to the North side of Trent Bridge. We got off the bus at the site of Turney’s Old Tannery building which is now flats and houses and is called Turney’s Quay.

We walked down the west side of the River Trent, called Victoria Embankment after Queen Victoria until we came to the big gates of the memorial gardens.  Nottingham city coat of arms is inscribed above and lists of men in Nottingham who died in the 2 world wars. Further inside the gardens we saw the statue of Queen Victoria which was originally in the city centre.  We all agreed that it was looking dirty and could do with a clean!

Beyond the statue there is a memorial in the round called the Great War Memorial. It was opened in June 2019 by the Duke of Kent on land bequeathed by Jessie Boot.  It contains 14,435 names of fatalities of the two world wars etched into the stone.  The names were of all the people who had died in the war effort from the whole of Nottinghamshire. In the middle there is a 5 metre monument where visitors can pin poppies and the inscription of “Lest we forget”. To frame the memorial on the outside there is built up landscaping which has been planted with wild flowers to flower from time to time throughout the year.

We left the memorial gardens, crossed the road to be alongside the Trent and walked up towards Trent Bridge. We came to the flood markers on the wall and noted that the highest the river had been was mainly prior to the 20th-21st Centuries. There were just 2 dates in the last 100 years when the river flooded and they were in 1947 and 2000.

Beyond the flood markers we walked under Trent Bridge and came up on the opposite side of the road. Walking over Trent Bridge south bound we came to Trent Bridge Inn. We ate/drank here and were seated in a large area with large tables designated for big groups which was ideal for us.

In the early afternoon we met with Keith our tour guide in the entrance courtyard to Trent Bridge CC where Notts County Cricket club plays and is also the host in international matches such as Test Matches, One day internationals and 20 20s. On going inside the building there is a reminder of past and present cricketers. We were given an initial introduction to the grounds in a large comfortable room which could be hired out to the public. As we walked round the grounds towards the TBI side we were told about Willian Clarke who originally set up the site after seeing the potential for the development at the back of the TBI in 1838 when he was married to the landlady.  He became captain of the All England team.

Today there is a stand named after William Clarke.  In his day scores were put up manually and this carried on till 1950 when an electronic scoreboard was introduced. In 2007 the ground was extensively redeveloped with a large new stand and extra seating and is now considered one of the best grounds in the world.

We saw the family entrance which is an alcohol–free area to keep it safe for people visiting with children. There is also an upmarket restaurant called “Six” which is a recent addition and gives wonderful views over the grounds. The players have extensive changing rooms, gym and physios on site but a lot of the players at present were playing abroad at this time of the year.

The Radcliffe road stand housed all the media facilities. We looked around the press boxes, Radio and TV rooms, plus also the commentary boxes. From the galleries on the upper floor there is a good view of the ground which was a little water–logged today!

The ground and its’ buildings are so vast and well worth the 2hr guided tour. We finished up back in the courtyard and could then look in the library which housed old literature about the ground before heading across the road to the bus to travel back to the city centre. 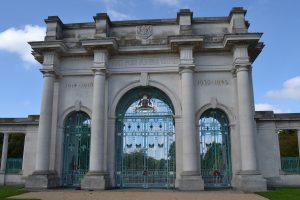 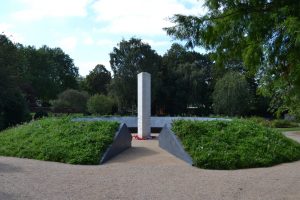 On Wednesday 11th September 2019 a group of City Treasures members met up at Papplewick Pumping Station for a guided tour of the underground reservoir, being transported to the site half a mile away by a seated trailer towed by a 1956 Fordson Major Tractor.

At the main entrance our guide gave us a very interesting talk about the history of Nottingham City Water Reservoirs and their importance. After a bad outbreak of cholera and typhoid fever a large number were built and linked together to supply city suburbs with clean water.

We descended down a flight of stone stairs to the reservoir chamber which could only be described as a gallery of wonderful arches, domes and buttresses capped by marvellous skilled brickwork which has to be seen to appreciate the craftsmanship.

The reservoir was drained and cleaned at intervals.  The internal walls were painted with chlorine and washed clean again, it also maintains a constant temperature of fifty degrees Fahrenheit all year round.

This particular reservoir was closed down due to two major cracks in the east wall after 27 years service, so lucky for us its been cleaned and fitted with lights etc.  Another brilliant display of Victorian workmanship added to our City Treasures. 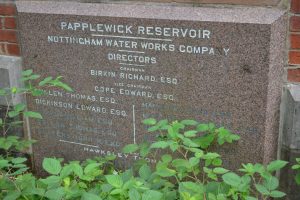 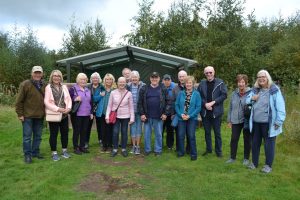 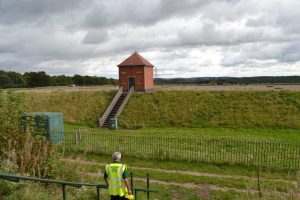 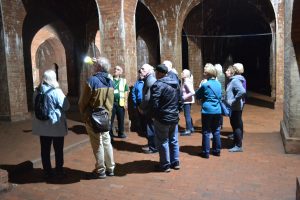 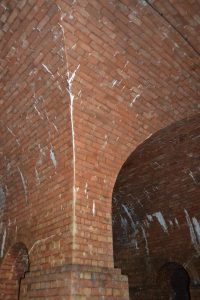 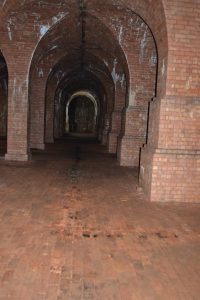 A good number of City Treasures Group members met up in Derby City on Wednesday 14th August at 11-00am and despite the bad wet and windy conditions we showed good spirits and visited the Council House then onto the Cathedral and finally the city museum all three venues proved to be of great interest to the group ,We will however be visiting Derby again hopefully in better weather for a closer look at the architecture and museums etc.

We took a tram to Nottingham Station then dropped down onto the canal towpath.  We then walked towards London Road where we left the canal to view the GNR Station Building opened in 1857 and designed by a local architect, Thomas Chambers Hine.

Present day – although severely damaged by fire in 1996, the station building  has been restored and converted internally to a health and fitness club.   A plaque to T C Hine is also on show.   A listed building, it has many key points to look at: original brickwork walls, cast pillars and cast frame roofing to name a few.  A group photo was taken at the main station entrance.   I also pointed out other city landmarks etc. 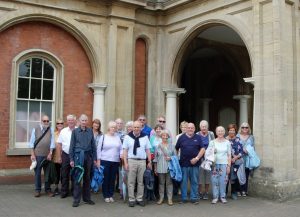 On Friday 28th June 2019 a number of members from City Treasures Group travelled to Chesterfield for a church Spire Tour.

Chesterfield Parish Church is an Anglican church dedicated to St Mary and All Saints.  It is a Grade I listed building with the world famous crooked spire.  It is also the largest church in Derbyshire.  Built in the 13th Century, the unusual spire stands 228 feet from the ground and leans 9 feet six inches from its true centre.

The church is largely medieval with early English and Gothic features.  The twist on the spire was reputedly caused by unseasoned timbers and the lean by the weight of the lead tiles which overall amounts to 35 tons.

The tower which the spire sits on contains ten bells cast in 1947 in Whitechapel Foundry London.  The medieval crane used in the tower construction has been saved and can be seen in the museum nearby.  The timber spire was clad with very thick herring bone lead plates and can be viewed on the tour, including the bell tower, after climbing a series of spiral stairs to the top and then enjoying the panoramic views of Chesterfield and beyond.
Another treasure which all the group members found interesting and enjoyable. 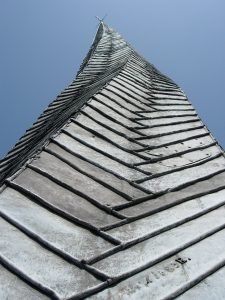 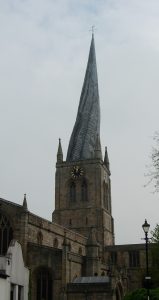 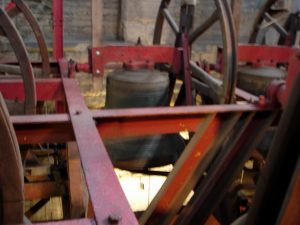 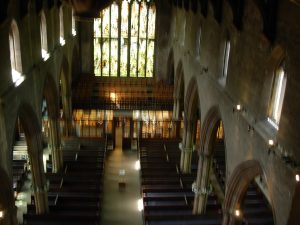 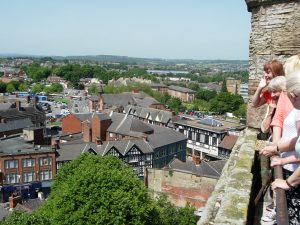 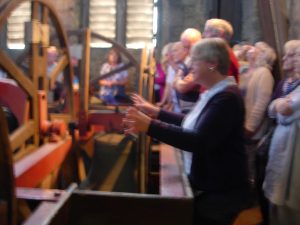 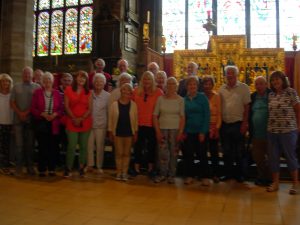 April visit to the Nottingham Industrial Museum.
A nice fresh sunny Saturday on the 13th April welcomed our City Treasures Group when we met up in the car park at Wollaton Hall and at 11.00 am. We all stepped into the Nottingham Industrial Museum for tours of the heritage centre to explore five fascinating galleries. Here talks were given by volunteers and also live demonstrations of lace machinery, pumps, generators, model railways etc. We were all amazed at how good the collection of industrial equipment was, also to mention a few famous names, Humber and Raleigh cycles, Brough motor bikes, not forgetting the John Player cigarette vending machine and a beautiful framed picture all done in local lace. Well in my opinion this venue deserves a visit from everyone interested in the city’s history, it tells the story well and the exhibits are brilliant.  Len Marsh. 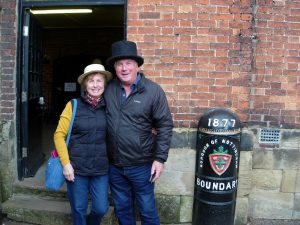 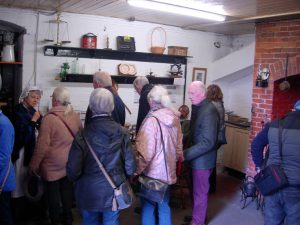 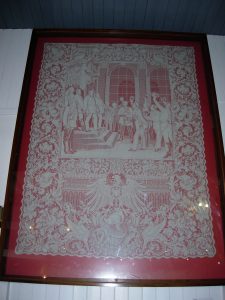 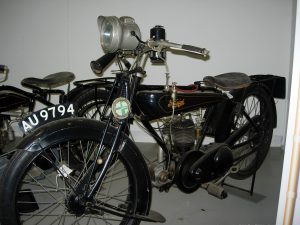 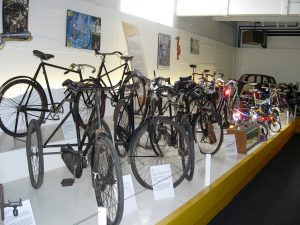 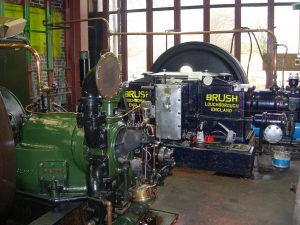 March visit to City Archives Centre.
A good turn out of thirty one members of City Treasures Group met in Nottingham Council House Arcade for a steady walk to the City Archives Centre on Castle Meadow Road. Once inside the modern building we were given a lecture regarding the purpose and workload of the archives. We then moved onto the workshop which covered the conservation of documents, scripts, books and photos, a tedious but necessary job.   Moving on we were taken into the safe storage room, which was temperature controlled and fireproof, all the items within were numbered and catalogued.  Next, we went into the main air conditioning plant room which was very modern and technical. Then back to the main research room with numerous computers and equipment they worked with. There was also a display of old prison and workhouse records, Watson Fothergill building’s info and maps laid out.  They also hold heritage talks and events throughout the year.  We all found the tour very interesting  It is well worth a visit and I recommend it to all members. Len Marsh 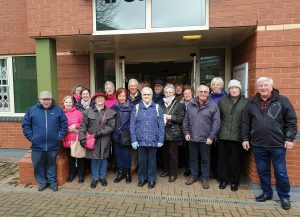 On Wednesday 9th January 2019 twenty-four members met up in the arcade where I gave a short talk on our latest subject which was the City Law Courts, a walk followed firstly to the Nottingham Crown Court. A building you would probably describe as having no architectural features but inside some lovely old framed photographs of Nottingham streets and people, also Goose Fair in the square, the Victoria Railway Station and Nottingham Lace factories, for which we are famous. After viewing these we split into two groups and entered courts number 2 and 3 to gain the feeling of the British Judicial system. This turned out to be a very interesting experience for all concerned. We then had an informal talk and questionnaire with the resident judge. We were treated very politely and made welcome by all the court officials.

Leaving this building we proceeded to make our way to the Nottingham Magistrates Court, a much larger complex which sits on the site of the Nottingham Carrington Street Railway Station, the stone gateposts still frame the pathway to it. The canal also divides the frontage which makes for a picturesque setting which is quite modern but pleasant to look at. Inside it has a circular hall with four floor levels divided by central lifts leading to 18 courtrooms. We all sat in court no 2 once again for experience, then when we came out, we viewed the internal superstructure design which we found interesting. We took refreshments in the internal café run by Tree Tops.  Outside again we observed the Bridewell Police Station and the Youth and Family block also part of the complex, the car park area at the back used to be the Midland Railway goods shed dated 1874.

Members commented on how interesting this trip had been, it was certainly an eye opener for most, who were glad they came.  Len