This group is currently closed.

The group was set up for members to be taken on organised walks in and around the city centre of Nottingham.  We visit places of great interest and learn about the city’s history; searching in areas where normally you would never go, showing you wonderful buildings and architecture.  Also the now famous cave system linking up with the city castle.  We also talk about famous local people on our travels.  Nottingham has changed so much in the last fifty years, so we have plenty of different topics to tell you about.  Most members who join us enjoy free travel to the venues on buses or the tram.

If this information ticks the box for you, consider joining us on walks.  You will be made most welcome.

On Wednesday 11th March, (when things were relatively normal!) 27 of us caught the number 10 bus to Ruddington. Upon arrival we had tea and biscuits and watched a film about the history of the museum, discovering how it was restored into a working museum. We were then divided into 3 groups of 9 for our tour.

Each group discovered the living Museum where Nottinghamshire people have been Framework Knitting since the 18th century.The frame was invented by William Lee in London, but his Patent was refused by Elizabeth I on the grounds it would take the work away from hand workers. John Ashton, Lee’s worker, upgraded the machine and in 1728 after trying to adapt the machine to use cotton, but, becoming too expensive, the business moved to Nottinghamshire to carry on with framework knitting.We saw a framework knitter in action and were able to create souvenirs on a circular knitting machine. We explored the wash house and other period buildings and viewed the historic collection of hosiery including Queen Victoria’s stockings. We then viewed the poor living and working conditions, which eventually had led to the Luddite revolt.The workers who were on low wages, which included whole families, had to pay for the upkeep of the machines even when there was no work available. This framework knitters yard, we discovered,was the precursor to the Nottingham Lace Industry in the 19th century. Before we left to go home, we visited the textile shop and were able to relax in the museum tea-room and the gardens.

We all thoroughly enjoyed our visit to this museum tucked into the heart of Ruddington.  it was easy to get to as regular buses run there. It reminded me a little bit of Quarry Bank museum with its’ Victorian material-making machines but on a lot smaller scale, but still lots to see! 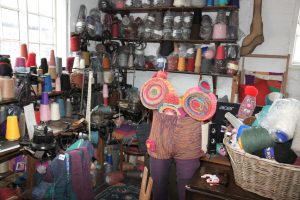 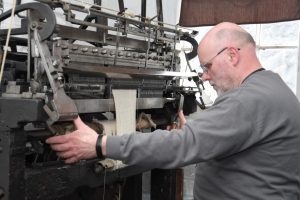 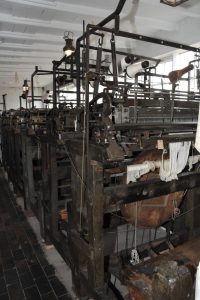 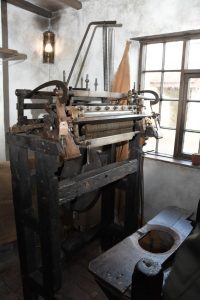 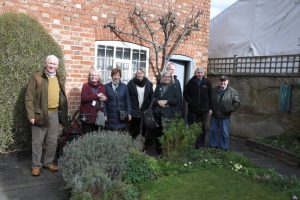 On Wednesday 12th February 2020 a large number of City Treasures members attended a slide show given by a fellow Eastwood U3A member Mr. Bill Saxton at the Horse and Groom pub Moorgreen.

The show was the history of Eastwood put together and explained by Bill.  He showed us very old postcards of street scenes, buildings, churches, houses and parks; also many local railways and stations. So much has changed in the small town of Eastwood in such a short time as the slides indicated.  Bill added historical notes as the show went on which made it very interesting.  As we found out some very important family houses were demolished to make way for new developments – a sad loss. Eastwood however still attracts tourists from around the world who follow up on the story of Lawrence and his birthplace. It was a good show and the members enjoyed it, also its a good learning feature.

City Treasures Group wishes to thank Bill Saxton for his efforts and interest.

A party of 31 members joined our coach trip to the Amazon branch at Haydock Nr St Helens.  On arrival at our destination we were confronted by two massive industrial warehouses, built in a lovely landscaped area with a large free car parking space at the front for staff.  This 30,000 square metre “sortation centre” has created 250 permanent jobs and was opened recently – in September 2019.  The centre will sort parcels received from Amazon’s fulfilment centres before they are transported to delivery stations, where they are collected by drivers and then taken to customers.  Seasonal and temporary recruitment at peak times, such as Christmas, is expected to swell the numbers working there and it has the capability to employ between 800 and 1,000 workers if demand grows. This sortation centre has an important role in supporting the fast and reliable delivery service that Amazon customers love and trust.

We were met by the general manager Kevin Marsh and site manager Mark.  They took us through reception and security then into a conference room where they laid on refreshments followed by a presentation talk and video, then a health and safety talk.  We were divided into four groups and taken on a very interesting tour of the building.  The conveyers are all controlled and monitored  by a team of IT engineers in a central area 24/7.  We then returning to the conference room for questions and more drinks.  After a final farewell and thanking the friendly staff we boarded our coach for home.  A very enjoyable trip which answered the question  so many people ask, “I wonder what’s inside that big Amazon building?”  This trip got us off to a good start this year.  Many thanks to our member Yvonne Carey who organised the coach well done.