The group had a tour of 6 local churches, by the Hucknall Tourism Group which included cream tea at Beauvale Priory.  David & Joanna Keeling organised the trip. Churches have always been a place of sanctuary – on this occasion from yesterday’s heat!!

On the 2nd of July the Church History Group visited Mount St. Bernard’s Trappist Abbey near Coalville in Leicestershire.

Last year we discussed a range of Church History themes, one being the History of Monasticism in western Christianity. The visit was an opportunity to meet and hear the history of a monastic community from monks currently living out a contemplative monastic life of prayer, work and study.

We were welcomed by Bro. Adam the Guest Master.   Fr. Joseph, currently the Prior of the Abbey, outlined the history of the Cistercians founded in the 12th Century and a later reform Cistercians of the Strict Observance Known as Trappists from the Abbey at La Trap where they were founded.  A Trappist monk’s day begins at 3 am with prayer and mediation and thereafter they follow the six prayer hours of the day interspersed with periods of work and study. Their day ending at 8 pm with Compline (Night Prayer).

After the dissolution of the monasteries in England  the Cistercians left the UK, only returning 300 years later when Irish and English monks from  the Abbey of Mellray in France established  Mount St Bernard’s Abbey in 1835. The current abbey buildings were designed by the Architect Pugin (famous for Nottingham Cathedral and the Houses of Parliament among many churches and other buildings he designed).

We joined the community for midday prayer and then visited the abbey shop to sample some of the product: Abbey Honey and wax candles from the abbey bees and Trappist ale (Tint  Meadow) from the abbey’s recently established brewery ,

All of the group said how much they enjoyed the visit. We then went to St Joseph’s Café next door to the abbey for afternoon tea and delicious ginger scones.

The Church History group had an interesting visit to Derby. They went to St Mary’s Bridge Chapel where people used to pray for safety going in and out of the city. Then had a guided tour of Derby Cathedral. This was  of interest to some  because of the tomb of Bess of Hardwick. Photo by Sheila Bowerman of Jim in the Bishop’s chair. 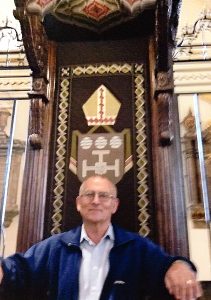 Report from Lorna Stirland – April 2018.Church History has been running now for three months.  We have covered various topics; these include the establishment of the early Christian church, the spread of Christianity by the Romans via their trade routes.  Key figures in the early church including Constantine, St Columba, St Cuthbert and Augustine, the establishment of the monasteries and their dissolution under Henry XIII, and the foundation of the Church of England.  In the sixteen hundreds the development began of the non-conformist denominations such as, Baptists, Methodists, Calvinists the Pentecostals and many more, up to the present day with Moody and Sankey, Billy Graham, John Wimber, the Toronto Blessing to name a few.
Our topic in April was the role of women in Christian History; we began with Eve and various other women of the Old Testament including Delilah, Deborah, Sarah, Ruth and others before looking at Mary, the Mother of Jesus, Mary Magdalene and other women of the New Testament. We discussed how women were suppressed by early Popes and stopped from preaching and taking leadership roles within the Catholic Church.

We have so far covered the history of Christianity from Old Testament times up to the present, in just 2 sessions!

We discussed Judaism and how it absorbed ideas and imagery from other cultures. We also learned that Judaism introduced a change in faith involving personal worship.

We have talked about the writing of the gospels, the influence of St. Paul, the non-conformist churches, the Oxford Movement, the Pentecostalists through to the modern churches such as the Vineyard.

The next meeting will be dealing with the role of women, particularly with Mary Magdalene.

After that we plan to look at how the Bible was put together. We are also hoping to look at comparative religion.