A number of members of the Ukulele Group went to the Concert Hall , Nottingham to hear The Ukulele Orchestra of Great Britain.It was a brilliant evening of entertainment with excellent musical talent and a sense of humour. There was a varied range of music played and also included the opportunity for the audience, who had brought their instruments, to join in 3 Christmas songs. These we had managed to practice beforehand with music downloaded from their webpage. These are great musicians and the sound they produce is quite different from that of the well known George Formby from years ago.

Eastwood U3leles at the Canal Preservation Festival
May 2018

Over the May Bank Holiday weekend, the Erewash Canal Preservation Society held its 50thanniversary celebrations with a three-day festival event at the Langley Mill canal basin. The weather was excellent and thousands visited over the weekend and enjoyed the boats, the stalls the real ales and of course the entertainment in the marquee. Many diverse groups contributed to this and the U3leles had the afternoon spot on Saturday after a Battle of Britain flyover by a Spitfire!

The music went well and in addition to old favourites such as Sloop John B and Wild Rover, we learnt two canal songs for the occasion and also included some traditional fiddle tunes with ukulele, guitar and concertina accompaniment. We were very well received to judge from the applause and I quote from an email sent by the event organiser.

“The band was enjoyed by lots of people including myself and when I looked around the marquee, it was packed with people listening to you. You had obviously worked hard to put such a good programme together and particularly to include the two boating related songs. The music with the additional instruments also sounded great. I hope your band members enjoyed being with us and performing as much as we enjoyed including them.”

I think I can safely say that we did enjoy ourselves and that it was worth all the hard work, so well done to everyone involved.  Judith Queripel 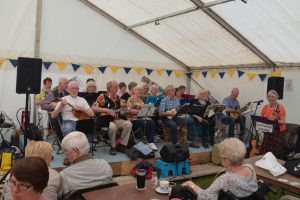