The group meet on the second Tuesday of each month, at Dora Phillips Hall from 1.00-3.00 p.m. to plan future events and review past ones.

The contact for the group is Marianne Sparrow tel. 01773 717 500 or email mariannesparrow@gmail.com

Future events:
NB.  The planning meeting will be on the 3rd Tuesday in May 2022 rather than the 2nd Tuesday.

Confirmed bookings:
We tend to go to the Playhouse fairly often as we get full price tickets for £7.50 via their hotnights scheme. 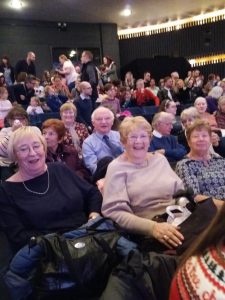 Since we put the restrictions of Covid behind us and returned to our much loved theatre visits we have been to see a wide variety of productions, over twenty in all,  at some of our favourite venues.

It has been wonderful to see how the Playhouse bounced back from closure to continue to offer us amazing deals on their productions through their hot house scheme where we get top priced tickets for £7.50. The group have seen some first class professional productions here starting in November with a marvellous adaptation by Mark Gatiss of A Christmas Carol. December was the classic pantomime Beauty and the Beast. Several of the plays have been national premieres including the extremely poignant Private Peaceful, an adaptation of Michael Morpurgo’s novel set in World War One. Red Ellen a biographical piece about a little known but extremely vocal Labour MP Ellen Wilkinson who led the Jarrow march. March  brought us First Touch, a poignant personal account of a Nottingham lad trying to get into professional football. Our final installment in August was the world premier of Identical directed by the renowned Sir Trevor Nunn. The group widely agreed that this was the best thing we have seen at the theatre so far. It had 5* reviews from the press and has now gone to Manchester before beginning a national tour. We are so lucky we saw it first in Nottingham!

In January just before their recall to Moscow we saw the Russian State ballet perform the Nutcracker at the Theatre Royal. The productions there are a little more expensive though we do get a group discount and in many cases it’s well worth the extra to see top class performances as was the case with Nigel Havers and Patricia Hodge in Private Lives. Not every production gets a good review however and we were disappointed with their production of Whistle and I’ll come to you in May.

In March we went to Derbys lovely theatre to see Sheilas Island, a comedy drama which proved very amusing. Occasionally there is a gem of a find at a local theatre and Spring Awakening at the Duchess theatre Long Eaton proved just that. A coming of age musical, set in Germany in the 18th century, doesn’t sound so good but it took us by surprise and was excellent. For other musicals we traveled to the Palace Theatre in Mansfield and saw two excellent productions of  Oklahoma and Chess. Nearer to home we are never disappointed by Nowmads. The singing, musical and dramatic skills of this local group is outstanding and their production of Rapunzel was 5 star. Look out for them doing Sister act this October!

Then on a wonderfully sunny day we hopped on the tram to Lakeside Arts for a talk about DH Lawrence’s plays and how he used Eastwood as inspiration for characters and plots.

Lately we have been to a favourite of ours the Lacemarket theatre to see a very well acted production of Queen Ann. We returned there in July for People, a classic Alan Bennett and to round off our season before the summer break we went to the aforementioned Identical at the Playhouse.

Following a break in August we have treats in store as we look forward to another year of plays, premieres, musicals and all round classics of stage, dance and screen.

We are a friendly, supportive group who look after each other for lifts etc. As a couple of people have left the group due to relocating there are 1 or 2 places available if you wish to join, contact Marianne on 07799210132

Beauty and the Beast – 4th December at Nottingham Playhouse

Our group felt this was a sparkly piece of Christmas magic, sure to captivate and delight everyone over the festive period.

The soundtrack of the show is peppered with mashups of upbeat contemporary music and works well; every single member of the cast has a strong voice and manoeuvres the choreography well. As a company, they have excellent chemistry, and all have exceptional comic timing.

All our group made positive comments such as the pantomime was really first class.
Marianne Sparrow

Overall, this production by Mark Gatiss is ‘traditional with a twist.’ The script lives up to his stellar reputation.

The costumes generally stay true to the Victorian roots. There is comfort in this familiarity, which makes the unexpected more pronounced. This is exemplified in the digital effects which are stunning. These dovetail adroitly with the more naturalistic aspects of the production. Spectacular lighting effects are used to foreshadow events, move the plot forward or to ‘spook’ the audience.

The set is like nothing I have seen before. Huge towers of antiquated filing cabinets and bureaus fill the stage. Victorian accoutrements are everywhere, from leather bound books to burning braziers and the attention to detail is consummate. Director Adam Penford tells us in the programme that there are ‘over fifty characters and thirty scenes.’ Our group marvelled at how expertly the set was manipulated and how well the actors managed the innumerable costume and set changes. A feat in itself.

I have seen many versions of this production, and this one was so dramatic. The story was adhered to, and it was a fantastic performance from the whole cast.