On Friday 21st June, a full coach of Eastwood U3Aers set off for Bletchley Park – the once top-secret, but now celebrated, centre for British intelligence in WWII.

As a child born in the 50s, I was brought up on stories of ‘the War’ but this visit gave me an insight into an aspect of the ‘Home Front’ I still knew little about (although that was more than the population did at the time).  The Visitor Centre gave an effective initial overview of the development of the site against the background of the events of the war, and contained numerous exhibits, a café and a book shop. You could also pick up a free multi-media guide or book an introductory walking tour.

Our softly spoken, but incredibly knowledgeable, Canadian guide immediately opened our eyes to Bletchley’s vital importance (it is believed that its work shortened the war by 2 years) and also to the mind-boggling complexity of enemy intelligence codes transmitted by the Enigma and later the Lorenz machine. We also learnt about the types of people employed there from young and brilliant mathematicians and linguists harvested from top universities, to debutantes, valued for their more colloquial German acquired at finishing schools in Europe, to motor-cycle champion dispatch riders.

Huts 3 and 6 had been restored to show the different stages involved in completing the decrypting and also the far from luxurious working conditions of the many employees. (There was a war on!) Hut 8 featured: a recreation of the office of Alan Turing – one of the most famous and the most tragic of the code-breakers; interactive displays to illustrate some basic code-breaking methods; and a heart-warming tribute to an ancient but very effective method of carrying messages – the homing pigeon! The Bletchley Park mansion itself contained reconstructed rooms and also oral histories from workers, now at liberty to speak about their work, living arrangements, recreation and romance. Outside were the grounds and the lake, once used for recreational ice-skating by the workers in wartime winters.

Sadly, I had only just set foot in the computing museum, when it was time to go. There was clearly much more to experience at Bletchley but fortunately, your ticket allows return any time within a year!

Visit to Jodrell Bank June 2018
Sixteen members boarded the minibus bound for Jodrell Bank in Cheshire. We arrived at 11-30 am and were given a wrist band and a map of the site. Some retired to the cafe for coffee and others went around the various exhibitions.

The first was the Planet Pavilion which depicted the planets in our solar system. A clockwork orrery was situated above near the ceiling, was activated by turning a handle. All the planets moved in their orbits around the sun.

Outside one could stroll around the giant Lovell telescope.There was able seating to sit and admire this wonderful structural engineering. There are two smaller radio telescopes, one was elliptical in shape, named Merlin.They were linked to the Lovell telescope when observations were made of comos.

After another coffee break we visited the Space Pavilion which had a fascinating array of cosmic information ; such as quasars, blackholes, and galaxies. A lady from Manchester University gave an interesting lecture on how the Lovall telescope was built and a summary of professor’s Lovell involvement with the development of radio astronomy . She explained how neutron stars were formed,and also how the whole wave spectrum was utilised to form pictures of the comos.
It was a wonderful day and we must thank Janet for organising the visit. Alan Bates 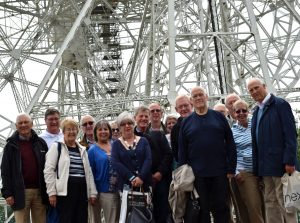 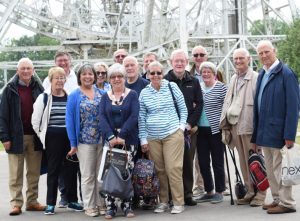 May 2018
The Radio Waves groupwas treated to a fantastic lesson by Ray Dring showing a film about the Astrolabe which is a invention designed to show the elevation of the planets in the night sky. Next we saw three models, the first being an Orrery invented by Lord Orrery of Northern Ireland, showing the orbits of the solar system over many years.  The second was a Tellurian showing the sun, earth and moon orbits.   Finally we saw a working model of Leonardo da Vinci’s first clock that is wound up using chains and weights.   Janet Kirk
Photos by Frank Queripel 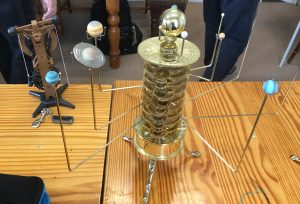 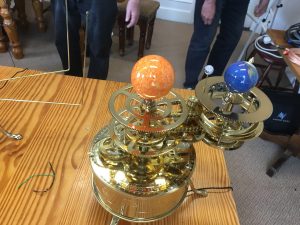 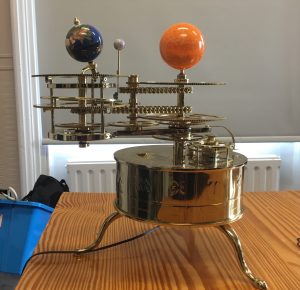 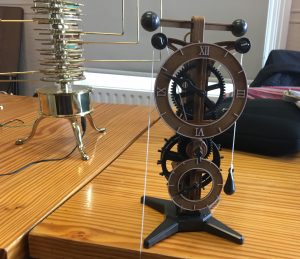 October  2017 visit to the British Horological Institute
We all had an enjoyable and informative trip to the British Horological Institute on Thursday.  Being able to see such a wide range of clocks and watches. Hearing the speaking clock, which was first used on 24th July 1936,  was extremely interesting.  A photograph of the speaking clock is below.  The building these clocks are housed in is a gem.  We all said what really clever people made these timepieces.  It is good to know there are courses still being taken to learn this art.  We all thanked the ladies running this museum who were very informative and most willing to answer any questions.   Janet Kirk 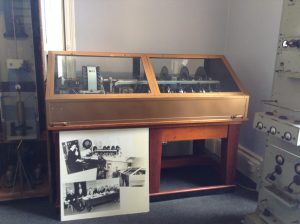 The speaking clock from 1936 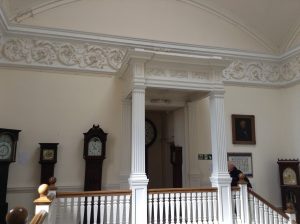