There were 12 members present and the topic for this month was “Falling”.  The poems we read reflected many interpretations of “Falling”, some funny and some very sad.

There were 13 members at this month’s meeting.  Our chosen topic was “Questions and Answers” and these are the poems we read.

There were 16 members at our meeting today including two new members Derek and Margaret who we welcomed to the group. Our topic this month was “Animals” and, unsurprisingly, quite a lot of the poems were about dogs. There were also a number of familiar poems which are still enjoyed no matter how many times you hear them.  These are the poems we read:-

Our topic this month was “Relations and Relationships”. There were 14 members present and we enjoyed a wide choice of poems, some sad, some about situations we could all recognise and some very funny. These are the poems we read.

Christmas Social: At the December monthly meeting members of the poetry group read a selection of festive poems, some well-known and others written by themselves. Their rendition of ‘Twas the night before Christmas’ by Clement Clarke Moore was widely appreciated by the audience, who were also entertained by the Ukulele and Creative Writing group. The members and committee gave thanks to the group for their valued contribution. 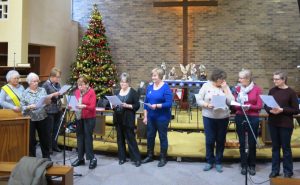