There is a monthly meeting to discuss venues etc at the Dog and Parrot, Eastwood.  Dates and times are listed below as they vary this year.

National Trust visits will be made on different days and times, travelling to the site by coach.   The cost will be for a seat on the coach and must be paid in full when booking.

Members are responsible for the cost of their entry to the National Trust property/site.

Gardens you can virtually tour while you are isolating.

The National Trust Group had a wonderful visit to Wightwick (Wittick) Manor near Wolverhampton this month.  The beautiful tudor manor was originally the home of the the Manders Family (paint manufacturers).  It was full of interesting artefacts including paintings, stained glass, painted plaster reliefs and William Morris wallpapers.

We also enjoyed wandering around the large gardens full of flowers fruit and vegetables which many of us were able to purchase!!  Weather was good too so an enjoyable day!!

The latest National Trust Group visit was to Erddig (pronounced Erthig), near Wrexham.  It is a Grade I listed building and is one of the country’s finest stately homes.  The house is famous for how the family treated their servants, with a display of portraits, photographs and verses lining the walls, providing a record of the people who lived and worked on the estate.

The Yorke family never threw anything away and when he gave the house to the National Trust in 1973, Philip Yorke insisted that everything be kept together and nothing ever be removed.  He also requested that the house should be shown how it was in 1912 when his mother lived there.  So no electricity and some of the rooms were quite dark on a dull day.  However, lots to see and another really enjoyable trip.           Margaret Naylor

The pretty moated Manor House was quite small but quirky and very interesting. The staff were approachable and extremely knowledgeable too. The grounds were lovely and also the walk up to the little church which was lined with daffodils, primroses and violets. The weather was dry and mainly sunny so lucky all round!                 Claire Booth

Beningbrough Hall was the venue for the August visit of the National Trust Group. It was an RAF base during WW2 and was returned to a country house gallery after the war in partnership with the National Gallery. There were many 18th century portraits of people who had influenced British history and culture. Also the top floor was devoted to portraits of creative women of today – Dame Judi Dench, Darcey Bussell and Iris Murdoch to name a few.
The gardens were fabulous too, walled, herbaceous, formal and traditional with wildlife areas and riverside walks. Enjoyed by all!  Claire Booth 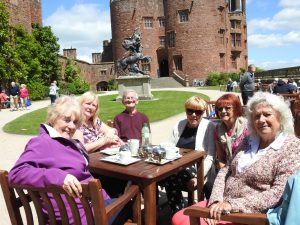 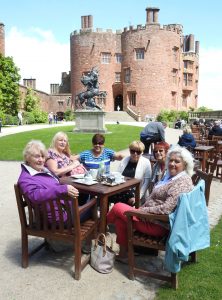 Our second visit of the year was to Croome Court near Worcester. A lot of the original contents of the house were sold after the wars to pay off debts but The National Trust are gradually restoring it. We were able to visit a folly that is rarely open to visitors – accessed by crossing a stile and a field of sheep and their newly born lambs. So cute! The view from the top was fantastic – well worth the climb! The parkland and gardens were Capability Browns first commission.       RAF Defford  (the local airfield and all part of the estate) was used during the war as a secret radar development base and has a very interesting museum there. We ate in the 1940’s style canteen surrounded by memorabilia from that era! A great day out!  Claire Booth

The Wimpole Estate near Cambridge

Our first visit of 2018 was to The Wimpole Estate near Cambridge. A very impressive Manor House with many interesting features. We were allowed to explore freely even ‘downstairs’ to the kitchens and laundry, which were just as they used to be!
We also explored the working farm which provides the produce for the estate and has three magnificent shire horses (my favourites) to do the hard work on the land.
Several of us were in the Piggery when suddenly the pigs started to jump up in their sty’s, making the most deafening noise as (unbeknown to us) it was almost feeding time!
There were various rare breeds of pigs, also cattle, chickens and other farm animals! Again we were free to roam at will!
The gardens were interesting and beautifully laid out and would be worth a repeat visit during Spring or Summer when in full bloom.  Captain and Elsie Bambridge bought the house in 1938 – Elsie was the daughter of Rudyard Kipling. Elsie lived in the house until her death in 1976 when she left the estate to the National Trust.   Claire Booth