25 noon    The Foresters Arms Newthorpe  (in garden if nice)

Look forward to seeing you all soon

Pub Pals do it again!
At Mellors’ Mews recently, Pub Pals thought they were in for a few quiet drinks until drag artist Stawberry Whip, otherwise known as Ian George Norton, hit the floor and got us all rockin’ to the sounds of Madonna, Tom Jones and Dusty Springfield. What a surprise! We weren’t expecting that, as you can see from the photograph Geoff Gration 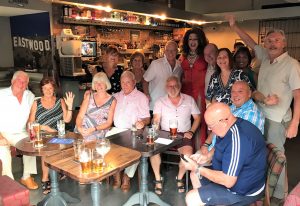 The Dog & Parrot –The Micro pub pals enjoying a night at  The Dog and Parrot Eastwood on Thursday 29th December. Sheila Tivey 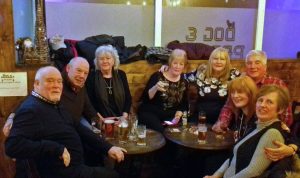 The Dog & Parrot – Micro brewery pub pals out in force

Micro Brewery Pub Pals were out in force in Eastwood at the Dog and Parrot, Thursday, April 13th. Joining us that night were several real-life parrots and dogs – we kid you not! Check out the photo – who’s a pretty boy then? The puns flowed thick and fast, as did the beer, one punter drank so much beer he was parrot-lytic; another was so incensed by being bitten by a parakeet he was spitting feathers; and, with beer like this, no wonder Long John Silver was one-legless! Next Micro Brewery Pub Pals will be at the Miners’ Return, Kimberley, Thursday May 11th, from 7.0 pm – knee pads optional.  Geoff Gration 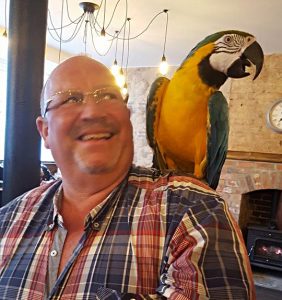 Micro brewery pub pals had a thoroughly enjoyable visit to Roots at Kimberley in February. They felt they were made very welcome. Representatives from the Dancing Duck brewery were there to give a talk and refreshments were also served. They would recommend a visit to anyone. Yvonne Carey

First meeting of Pub Pals at the Hayloft 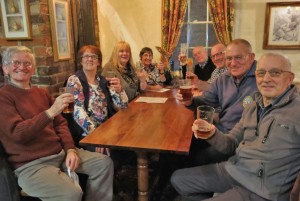