The group will look at various aspects of the history and architecture of Nottingham, following the routes outlined in the Discovering Nottingham folders.

The following walk folders are available for Eastwood & District U3A members to borrow to self-guide*.

Walk 12 – Trent Bridge and the Embankment

Please see Barbara at a monthly meeting or phone her on 0115 946 8721 if you would like to borrow any of the folders.

*Please note: self guided walks are not covered by U3A insurance.

While I have been out for my daily walk, I’ve come across two Blue Plaques which I thought I would look into in more detail. I have attached my findings.

The Churchyard of St Mary the Virgin, Church Lane, Attenborough 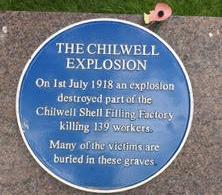 Shortly after 7.00 pm on Monday 1st July 1918, a catastrophic explosion occurred at the No. 6 Shell Filling Factory, Chilwell – the biggest civilian tragedy of WW1. 139 civilian workers were killed and another 250 injured, many severely and the majority of those killed were never identified. Despite the sheer scale of the disaster, which damaged buildings up to a mile away and the blast reportedly heard 20 miles away, production resumed within a few days.

The plaque in St Mary’s churchyard stands adjacent to three mass graves containing the remains of many of those killed. The church burial register indicates that it is not known exactly how many individuals were buried in each coffin. Only thirty two of the total killed were positively identified, four of whom are in the graves at Attenborough, the others buried elsewhere.
After WW1 the Shell Filling Factory became an army depot that later played a significant part in WW2 as Chilwell Ordnance Depot, now Chetwyn Barracks. In the grounds, close to the explosion site, stands the 1919 memorial listing the names of all those killed, plus the names of two men who died in a smaller explosion in 1917.
In a glass jar buried inside the Memorial is an account of the explosion, written by Geoffrey Hall ‘….. I was in the garden and saw a great black mass coming towards me. The ground shuddered and I tried to run and was flying through the air. I was in hospital for 7 weeks‘

General Henry Ireton
This Plaque is on 15 Church Lane Attenborough 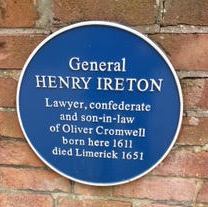 A principal player in the English Civil War, Henry Ireton was born in 1611 at Ireton House, Attenborough, a Grade ll listed former farmhouse, in the Attenborough Village Conservation Area.

The son of puritan parents who were prosecuted for their beliefs, he trained as a lawyer and, when King Charles l raised his standard at Nottingham in 1642 to gather an army to attack Westminster, Henry Ireton joined the parliamentary army. He married Oliver Cromwell’s daughter Bridget in 1646, and became Cromwell’s right hand man, engaging in many battles, including Edgehill, Marston Moor and Naseby.
Charles was defeat and tried for treason, Ireton sat on the King’s trial and was one of the commissioners who signed the death warrant.
Ireton joined Cromwell’s Ireland campaign in 1649 and was left in command when Cromwell returned to England in 1650. The following year Ireton captured Limerick, but shortly afterwards he died there of the plague. He was given a state funeral at Westminster Abbey, but did not rest there for long. After the restoration of the monarchy in 1660, the government of Charles ll had Ireton exhumed and hung in chains.
Ireton House was also the birthplace of Henry’s younger brother John
(1615 – 1689). He became a London Merchant and was knighted by Cromwell. In 1658 he was Lord Mayor of London.