It was a lovely sunny morning and we were greeted by a Robin singing as we started our walk. Blackbird, Dunnock, along with Blue and Great tits darting in and out of the trees, and of course Wood pigeons were seen shortly after. Further along the old railway line squirrels were scampering through the branches. As this opened to a clearing, in the tree top across the field, were  Redwing. These birds migrant to the UK from the colder climates of Scandinavia and Europe. As we moved on a flock of Goldfinch flew overhead. A short while later in a distant tree we saw  two birds in the upper branches. One was obviously a wood pigeon but the other may have been a Kestral, The binoculars confirmed it was indeed a Kestral. One of our group spotted a Tree creeper as we put out seed onto a fence post, stood back and waited. Blue and Great tits were flying in and out taking the seed when a Nuthatch put in a brief appearance. As we made our way to the headstocks Carrion crows and Black headed gulls were flying overhead. We made our way past the headstocks and back to the car park.
A lovely morning was had by all

Small flock of Fieldfare in the trees across the fields behind us. Full extension of camera lens to identify the birds on the computer. Sure sign winters nearly here. 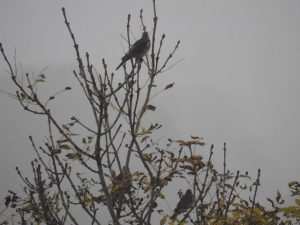 Within the bird watching group we have encouraged the members to keep in touch and share their stories/walks and photos, below are a few of their replies.  Also a poem about a song thrush.

Our Bird watching and wildlife visit was to RSPB Langford Lowfields near Newark. Observing social distancing and the rule of 6 we had a lovely sunny morning. A walk from the car park through the woods, where fungi were spotted, and hedged lanes saw us t the old gravel pits. A one way system was in place with very few people around. All the normal ducks/Geese were seen along with Heron, Kestrel, Cormorant, Mute swan, Blue and Great tit. Various warblers were heard but not seen, as is often the case. After a mornings spotting we all headed for home. 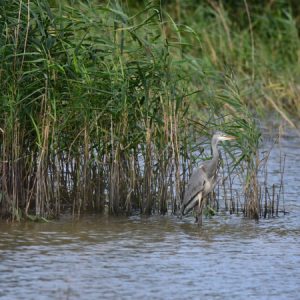 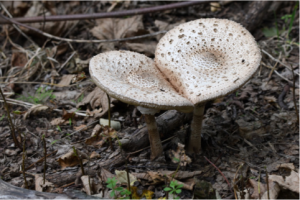 Paul Millington:
I had an early walk (5.00 am) up Long Lane, Moorgreen yesterday. The early morning sun rise  looked fabulous accompanied by the dawn chorus. With numerous Whitethroats, Yellowhammer and  Blackbirds.  There was a Buzzard regally sitting in a tree with Blackbirds squawking giving him what for. But the most amazing thing I saw was seven Hares in the crop fields. I have only ever seen the odd one or two before. 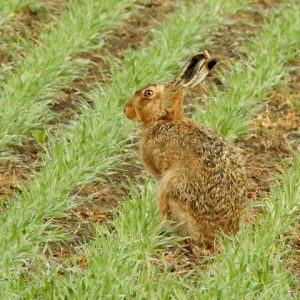 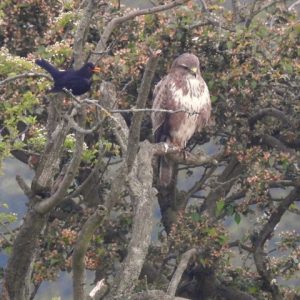 Had a walk around Aldercar/Erewash floods to get my bird fix. You may remember the number of ducks we see when we go there early in the year. You could count on one hand the ducks that are there now … BUT .” the musical sound of the migrants which are now resident is just beautiful.  Maybe we need to go later in the year? 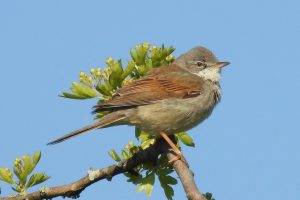 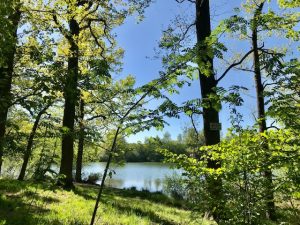 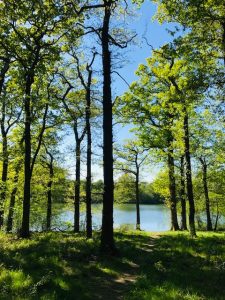 Jane Johnston:
Our blue tits chicks have fledged and we have some photos of the parents going in and out but missed the chick being fed on the branch of a tree. Our hedgehogs give us great pleasure and we capture them on cameras inside and outside the feeding box. I have a few recent photos below of Ol’ One Eye our returning male, who is blind in one eye (hence the name) and has many tricks. He tends to eat his fill, lie in the bowl and have a nap before having a good scratch and going off. We found that a feeding box was essential as the cats eat the food otherwise (see bottom picture of a few years ago, before we perfected the entry). Chris made a wooden box which has a dog leg pipe entrance. We feed them dog food and meal worms. 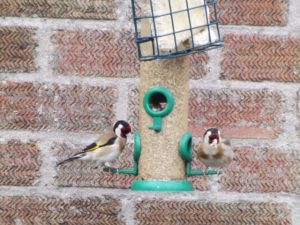 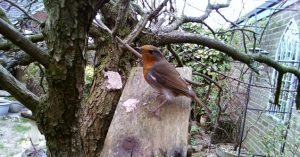 We walked across the fields to Watnall Woods this morning. We had some bird food so put it on the bird tables and sat for a while to watch the birds. There were blue tits,great tits and a jay who visited and a cheeky squirrel also had a feast. There are a few photos below. In the fields we saw a lapwing and heard a skylark. 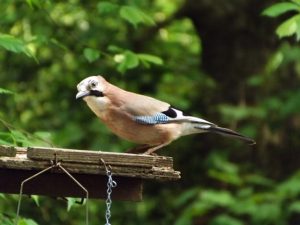 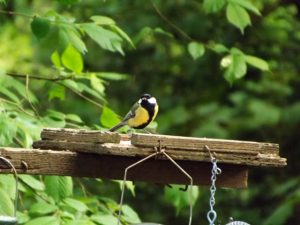 Colin Fletcher:
Robin chicks in our garage have now fledged and had a visit from the local Peacock 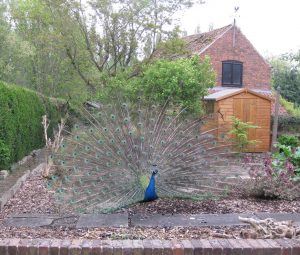 Bob Ford:
Some of mine from either Watnall woods or Brinsley Headstocks or local to me. 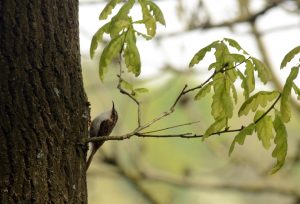 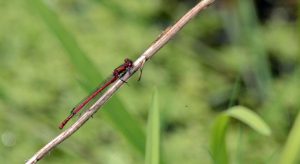 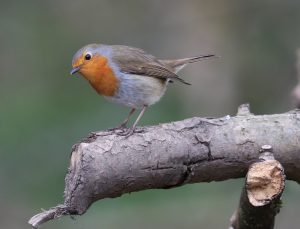 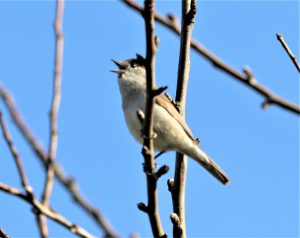 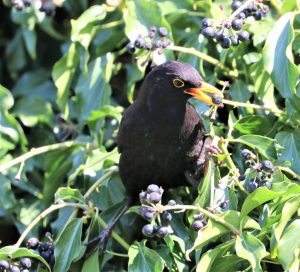 Oh, to be in England

Now that April’s there,

And whoever wakes in England

That the lowest boughs and the brushwood sheaf

Round the elm-tree bole are in tiny leaf,

While the chaffinch sings on the orchard bough

And after April, when May follows,

And the whitethroat builds, and all the swallows!

Hark, where my blossomed pear-tree in the hedge

Leans to the field and scatters on the clover

That’s the wise thrush; he sings each song twice over,

Lest you should think he never could recapture

And though the fields look rough with hoary dew,

All will be gay when noontide wakes anew

The buttercups, the little children’s dower

—Far brighter than this gaudy melon-flower!

Our visit to Shipley park on the 16th January 2020 was one of the recent days it didn’t rain! Walking from the visitors centre to Derby lodge very few birds were spotted, Carrion crow, Wood pigeon and Black headed gull. Walking through the woods at Derby lodge onto the old manor ruins Robin, Blue tit, Great tit, Long tailed tit, and Grey squirrel were seen. We were looking for Hawfinch which sometimes are located near the ruins. Unfortunately not today. We popped into Derby lodge for refreshments before heading to Osbournes pond. Mistle thrush and Magpie were viewed on our way to the pond where all our normal ducks/ geese were there along with Mute swan, Goosander and Muscovy.
17 species were recorded.        Paul and Chrys Millington