Visit – November 2021
A small group of us visited Leicester to see the Van Gogh Immersive Experience in All Saints Church and what an experience it was!

There was information about the artist’s life and works before the first display which was a digital study of the flowers in vases that he painted over and over again. I hadn’t realised just how many he’d done. This was followed by a short documentary about Van Gogh’s painting techniques.  How many know that he was colour blind?

The immersive experience came in the main body of the church where over 200 of Van Gogh’s paintings were shown moving around the walls, the floor and ceiling and merging into each other.  We sat on benches or in deckchairs which allowed us to look up easily. It was described as an atmospheric sound and light show in the advertising blurb and it really was.

We then opted for the VR Experience ‘A day in the Life of the Artist in Arles’ which took us through the woods and the village showing us his paintings along the way and ending on the Rhone riverside and his painting ‘Starry night over the Rhone’ which we were taken into – a very strange experience!

It is difficult to describe on paper just how amazing this experience was but there are articles and information about where to see it on-line.  Thoroughly recommended. 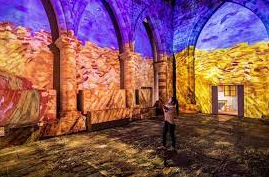 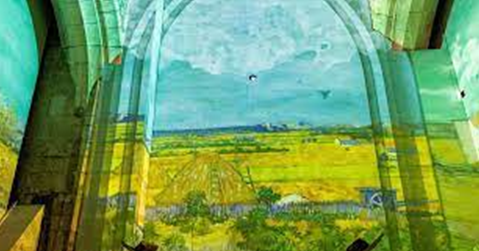 For our September (2021) meeting we went on our first gallery visit since lockdown.  We visited the Harley Gallery at Welbeck which was hosting an exhibition entitled ‘Coast, Country and City’.  There were works from over 50 landscape artists in a variety of media including Paul Nash, LS Lowry, and Walter Sickert.  We were delighted to recognise a work by Alfred Wallis having learned about him in one of our zoom meetings earlier this year.  A work by Hockney surprised us as it was not the usual painting that we might have associated with him. It was an etching entitled Wooded Landscape and not all of us knew about this area of his art.

Some of us also popped into the Portland Collection again.  This is a display of some of the fabulous Portland family heirlooms. It was well worth the effort to drive to the north of the county.  It was a beautiful day to explore the site with its cafe, farm shop and garden centre.

In October (2021) we visited the Erewash Museum in Ilkeston which was showing the works of George Bissill in an exhibition entitled ‘From the Pits to Paris’.  George spent his early life down the pit in Langley Mill and he produced many pictures of miners at work. He exhibited at Ilkeston Art Club and studied at Nottingham School of Art.  He moved to London where he came to notice drawing cartoons and caricatures as a pavement artist.  In Paris he learned about wood engraving and painted many dancers and scenes of Parisian life.  He produced advertising posters for such as LNER, and also designed furniture.  He moved to Hampshire and became a landscape painter.

It was fascinating to see how his styles of painting changed with the various influences he came under.  His works are on display in many galleries around the country.  We were all very impressed with the museum itself which many of us had not visited before.  We must go again!

Eight of us met at Colliers Wood on a very warm morning in July for our first face-to-face meeting.

We shared items of interest that we have collected over the years; some related to our recent topics of study and others that we have picked up on our travels.  These included books of photographs of Native Americans and Banksy, Egyptian hieroglyphs on papyrus, an Italian terracotta plaque and a watercolour by local woman, Vera Hedderley.  All got us started on a wide-ranging conversation.

We planned the rest of our meetings for the year which may be subject to change depending on how the Covid situation develops.

In September we plan to visit the Harley gallery at Welbeck Abbey.  An exhibition of landscapes is being curated from the prestigious Jerwood Collection and will include paintings by Hockney and Lowry.  We hope October will be an indoor meeting to look at Edward Hopper and November will be about Clarice Cliff.

June 2021 – Celebrity Art
We looked at four celebrities who are artists:
Prince Charles – had some professional training and produced pleasant, scenic watercolours and one surprising one of Diana.
Billy Connelly – has published 6 collections of mainly black and white slightly surreal line drawings of male figures.
Derren Brown – caricature/surreal/unflattering portraits of famous people,  but very cleverly detailed and executed (imagines his subjects will not like them) Probably right!
Una Stubbs – simply executed watercolour portraits, two of which (of Benedict Cumberbatch and Martin Freeman) exhibited at RA.

May 2021
We reviewed April’s meeting with guest speaker Stuart Hancock and then discussed the options for opening up after lockdown: continuing on Zoom; meeting in St Mary’s Lounge; visits to local exhibitions. 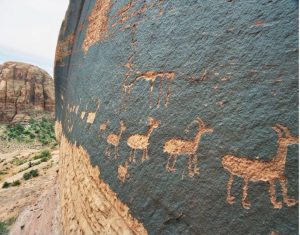 The Art of the Native American
We were very pleased to be able to welcome a guest speaker to our Zoom meeting in April. Stuart Hancock gives
talks mainly on British and American art in all its forms, generally of the 20th and 21st centuries.
We chose to hear him speak on Native American art – and what an experience it was. He showed some historic
works as he briefly explained the history of the Native Americans, how their art reflected their beliefs and ways of
life, and then their treatment by successive generations of settlers and governments. This provided the background
to the modern pieces that showed influences from the past.
Stuart had obviously put a lot of time and effort into such a detailed presentation, and we were immensely moved.
Many of us had not appreciated how badly the Native Americans had been treated and were stunned by the
different view he gave us. 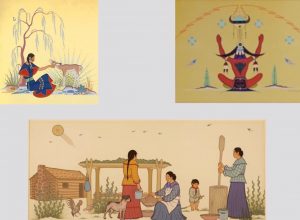 It is unusual for the group to be lost for words during a meeting. There was a lot to take in so we agreed that we
needed to take some during our May meeting to reflect on what we had seen and learned. 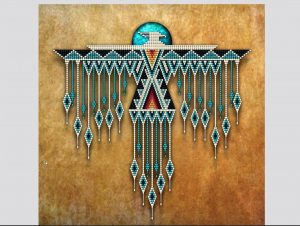 Many of us will be reading more on the subject. 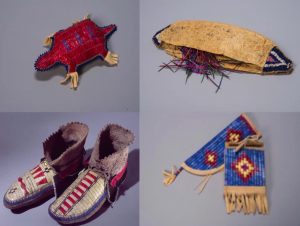 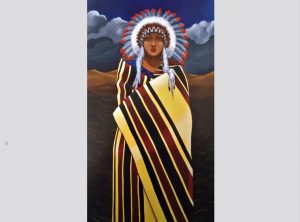 March 2021
We had a very enjoyable presentation lead by Margaret on the enigma that is Banksy. We were all surprised both by how much work he has produced and by the diverse nature of it. He is well known as a graffiti artist but was also behind the ‘Dismaland’ installation at Weston super Mare, some years ago, and the ‘Walled Off Hotel’ on the West Bank, and there are several books and films too. We were not all aware of just how far around the world his works have been installed and he’s been seen in Nottingham of course with ‘Hula Hooping Girl’.
We looked at the breadth of his work from beginnings as a graffiti artist and designer of albumcovers for the Bristol music scene, through various exhibitions and some of his well-known and controversial pieces. He very cleverly highlights political and social issues with recurring themes such as war and poverty. He was voted Britain’s favourite artist in 2019.
He very often causes headlines as when the famous ‘Girl with Balloon’ shredded itself on being bought at auction for £1m+. The painting was not completely destroyed, and it could now be worth twice as much!
There is a lot more about him on the internet and his own website is www.banksy.co.uk. Margaret had a tough time picking out what to show us in our limited meeting time and I’m sure we’ll all be exploring more about him.
Below: ‘Stop and Search’,’Flower Thrower’ and ‘Girl with Balloon’. 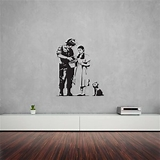 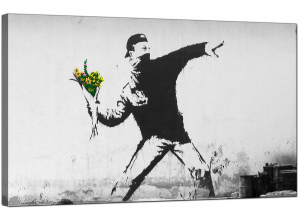 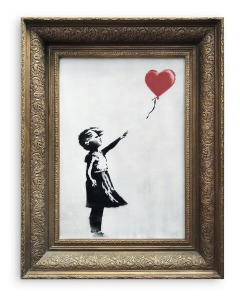 February 2021
There was a bumper turnout for our meeting this month, 13 out of 17 members.
David gave us a presentation on Roy Lichtenstein, starting with a brief outline of his early life and career. He showed a number of examples of different styles of his work which piqued our interest and gave rise to a variety of questions which give us all something to research further.
Lichtenstein was a leading figure in the pop art movement in America. He produced paintings parodying the comic strip and advertising, and even versions of other artists such as van Gogh. 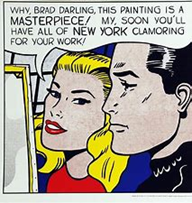 January 2021
We discussed our plans for the year and then had a presentation on Alfred Wallis. He was a Cornish fisherman who turned to painting very late in life.  He was unable to afford the usual artist materials so used ship’s paint etc and often worked on scraps of wood and card, with a limited colour palette. He died in the workhouse not having been recognised for his talent in his lifetime. 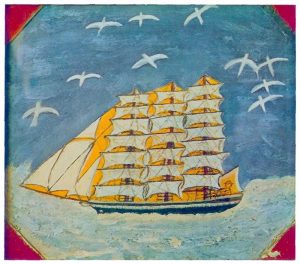