We have started meeting together via Zoom and our sessions are running pretty much as they were before.  One of us leads on a topic and others join in with observations, questions or extra information so it’s not like a lecture. It’s working very well and we are very pleased to have welcomed two new members.

Not all the group’s members join us but any presentations or notes are emailed out to all with a report of the meeting so we hope they don’t feel that they’re missing too much.  We have also been sending out links to online exhibitions and other happenings.We are missing going out to exhibitions which have been very enjoyable experiences.

In September, David introduced us to the Newlyn School and a particular favourite of his, Stanhope Forbes, a founding member of the movement.  He described how the artists painted from real life, using local models and illustrating local life, showing us lots of examples.

In October, Helen showed a presentation on Fauvism. This was a movement in France following Impressionism, foremost of whose artists was Matisse.  They were called ‘Les Fauvres’ or The Wild Beasts because of the impact ofthe aggressive nature of their painting and often strident use of colour.

November’s meeting is about Modern Architecture with a look at the Bauhaus School, Frank Lloyd Wright and Gaudi.

There will be no meeting in December and we will get together again in January to plan our next year of study.

We went ahead with our planned visit (well 3 of us did) to see the Lego exhibition in the Harley Gallery just before Lockdown.  It was called Brick by Brick and included everything from sculpture to photography, not just bricks.

The exhibits were thought provoking, such as the guns reproduced in Lego by a Northern Ireland artist who was familiar with both as he was growing up, to the funny as in the use of Lego figures in comic-style images.
Here are just a few of our favourites: 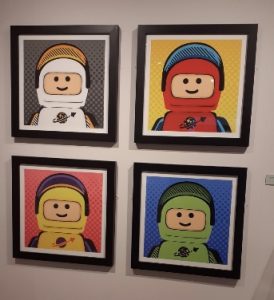 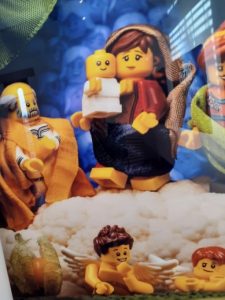